I have a confession to make.

I spend an embarrassing amount of time thinking about Star Wars. I’m not talking about flying a miniature Millennium Falcon around the living room making laser gun noises, or having epic one-man lightsaber battles in the garage. That would be ridiculous. I’m a grown man now, and while the Star Wars universe always lingers in the back of my mind, my fantasies have matured with time.

As POST’s Redwoods Program Manager, I get to spend a lot of time in our redwood forests. On longer walks through the woods, my mind sometimes begins to wander and “the Force” awakens. I find myself slipping, slipping back to “A long time ago in galaxy far, far away…” where Ewoks roamed the forest floors.

For the uninitiated, Ewoks made their debut in The Return of the Jedi way back in 1983. The official Star Wars website defines these creatures as “sentient furred bipeds native to the moon of Endor,” a surprisingly scientific description for a fictional character. Anyway, as forest dwellers, they’re extremely skilled in forest survival and primitive technology. They’re curious, smart, inventive and incredibly adorable.

I know what you’re thinking: A grown man looking for Ewoks? But it’s actually not completely ridiculous to imagine stumbling upon an Ewok Village in our local redwood forests. The scenes for that part of The Return of the Jedi were filmed in the redwoods of Humboldt County. So, it’s quite likely that if Chief Chirpa and his tribe of Ewoks actually existed, they might be found right here in our local redwood forest. Pretty logical, right?

Where You Might Find an Ewok Village in the Santa Cruz Mountains:

Want to play along with me? Walk through the majestic redwoods in our backyard and look up about 50 feet off the ground, imagining an Ewok village awash in revelry after defeating the Galactic Empire. It makes me giddy just thinking about it.

Here are three places in the Santa Cruz Mountains that you just might find an Ewok Village. Happy trails and #maytheforestbewithyou, always! 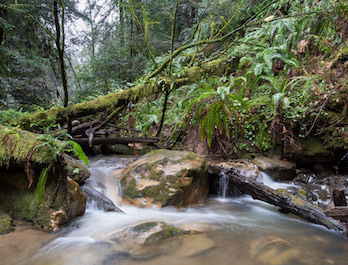 Meander through towering redwoods along a creek in a quiet forest. Learn more.

Go deep into the heart of redwood country and enjoy views from an old fire lookout. Learn more.

Why I Took My Young Kids Backpacking (Despite All Rational Thought)

Celebrating Women in the Outdoors!

Peninsula Open Space Trust (POST) protects open space on the Peninsula and in the South Bay for the benefit of all. Since its founding in 1977, POST has been responsible for saving more than 78,000 acres as permanently protected land in San Mateo, Santa Clara and Santa Cruz counties. Learn more