“We are thrilled to welcome Joel to the Bay Area to share with us just a snippet of his impressive body of photographs,” said Walter T. Moore, president of POST. “Joel’s work reaches people on an emotional level, in the hope that they will feel moved to save species which are vitally important to the world’s ecosystems.” 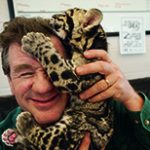 Sartore is an award-winning photographer and an engaging speaker, who has a wealth of humorous stories to tell from the 25 years he has spent traveling the world documenting wildlife.

In 2006, he launched the Photo Ark project to document 12,000 species in captivity before they disappear. By using plain black or white backdrops, Sartore emphasizes the uniqueness of each animal, regardless of size or fame. He hopes to inspire people to fall in love with these animals and join in conservation efforts to protect them. Sartore has already photographed around 8,500 species, and his lecture will include a slide show of his most compelling images.

Tickets are $40 for adults and $20 for students, available at www.openspacetrust.org/wsls-joel-sartore. All proceeds of the lecture series support POST’s work to protect open space on the Peninsula and in the South Bay for the benefit of all.